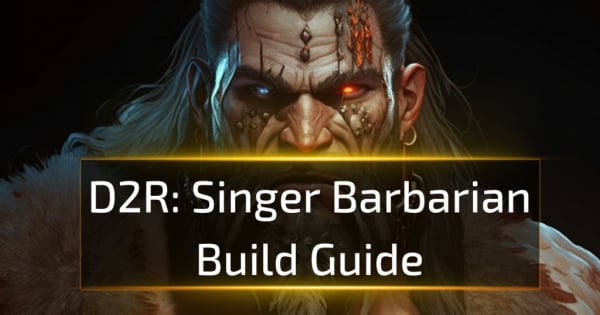 Singer Barbs are an extremely fun and viable way to play end game hell. Barbarians usually rely on raw power to cut and hack their way through anything in their path, Singer Barbs on the other hand bully and taunt their foes by shouting at them to death.  The nature of the build relies on a single spell to deal damage meaning we can concentrate on gaining a high % of Magic Find gear on our items, this makes the build extremely effective for farming.

The featured Barbarian build offers extremely high survivability, great crowd control and all round good area damage.  The build focusses around the War Cry skill which deals physical damage whilst also stunning the surrounding enemies (with the exception of bosses).  The spell has no cooldown which means the monsters around you will be constantly stunned whilst taking sustained damage.  The Barbarian has the same Faster Cast Rate breakpoints as a Sorceress, which means with little investment into our gear we can cast War Cry at a very fast rate and maximise damage output.  The build is supplemented by the usual Barbarian warcries, with Battle Orders doubling or tripling our total life pool and Battle Command giving us +1 to All Skills.

This build shines when hunting elite packs of monsters, with The Pit being the most popular option.  With the use of “Enigma” Runeword and the crowd control from War Cry, these Barbarians can efficiently farm anywhere in hell once the end game build has been reached.

Note: Only required if you have not yet made the rune word Enigma.

The War Cry skill is not available to us until Level 30, so for the early levelling process we need to take a different approach.  I would suggest utilising the Double Swing and Mace Mastery using 2 Flails – this will provide you with a reasonable level of damage to get you through Normal difficulty.  There are a number of early Runewords that help the barbarian get through Normal, I like to make “Steel” (Tir El) as early as I can in a Flail (the runes can be farmed from Normal countess) and buy a 3 socketed Flail in Act 2 and socket it with some flawed gems to provide some elemental damage for my other weapon.

Once you reach level 30 I recommend using your Normal respec and start your journey as a Singer Barb!  A Singer Barbarian is actually a very fast way to level your character from 30 onwards, due to the fact that you don’t require high amounts of attack rating to hit, as your main damage source is area damage from War Cry.

This section is intended to showcase an item build that is achievable after completing the game and you are ready to start farming Hell. Most of these items are easily obtained and is a good starting base to be able to farm specific zones through hell.

The most popular farming spots for barbarians is The Pit in Act 1 and Travincal in Act 3.  The significance of The Pit is that the champion and elite monsters in the area can drop every item in the game.  The council members in Travincal are well known for dropping high runes and the barbarian can farm this area very effectively.  For a Singer Barb, Travincal may be difficult with early game items and I would recommend concentrating on The Pit – you can transition to Travincal once you begin to find better gear.

In The Pit you want to target the champion and elite packs of monsters, when we first begin farming it will be in solo games so the non-elite / champion monsters will not provide much loot.  Once you find a pack you will need to get close to them and begin spamming the War Cry skill.  You will notice the surrounding monsters become stunned and unable to move, meaning they are unable to attack you for as long as you keep casting War Cry.  Keep an eye on your health as you can still be hit from ranged attackers, particularly if you are cursed and use potions whenever you need to.  Once you have killed the enemy, switch to your Ali Baba swords and use your Find Item ability on the corpse for an extra chance at finding gear.  From time to time, you may encounter monsters that are “Immune to Physical Damage”, at this stage of our build we do not have any way of breaking this immunity so I would recommend ignoring them and moving onto the next pack.

This end game build hits the second fastest Faster Cast Rate breakpoint (105 FCR) and stacks very high amounts of Magic find (450%mf +) whilst maximising our resistances and having approximately 5000 life. The most expensive piece and most important is the Runeword “Enigma”.  For magic finding purposes we use 2x 6 socket crystal swords with 6x Ist Runes in both them, alternatively if you didn’t wish to have maximum amounts of Magic Find you could use two “Call to Arms” Runewords (Amn Ral Mal Ist Ohm) with a minimum 4+ Battle orders to gain 2 more extra skill points into Battle orders when pre buffing.

Note: A more defensive option for the Mercenary would be to get the “Holy Freeze” aura.  This is a good choice for early game if you are struggling to stay alive, however the end game survivability is good and I would recommend the “Might” aura.

Strength:    Enough to wear your gear

Dexterity:   Enough to wear your gear

Vitality:       The remaining points should be put here

A Singer Barb is still viable in hardcore with only a few fundamental changes. The first of the main changes involved is prioritizing 75% Chance to Block and Faster Hit Recovery. With the use of a Storm Shield instead of a second “Heart of the Oak”, we can attain the ideal 75% chance to block with good Faster Hit recovery.  This change sacrifices our Faster Cast Rate and our damage output, so whilst this is viable it is not an efficient character for Hardcore

Our stat allocation also changes, we need to add points into Dexterity to achieve max block.  The amount will vary depending on your gear but is usually around 200.  We do lose a lot of life as a result of this, but it is worth it to block 75% of attacks and with Oak Sage we still reach a high value.

The Playstyle of a Singer barb is extremely fun as you aim to prioritize the Super Unique monster within a mob. You will want to pre buff yourself and your mercenary with our Battle Command, Battle Orders and then Shout. Teleport around with the use of Enigma for amazing movement and positioning, until you find a pack with a unique monster, simply teleport on top of the unique and then spam War Cry.  If you want to be extra safe, you can also cast Howl which will scatter any non-elite monsters allowing you to concentrate on the elite. With your 105 Faster Cast Rate, unique monsters and any minions caught by this will melt away. Weapon switch to your Magic Find Crystal Swords and begin to use Find item (Hork) on the unique monsters’ corpse to have another chance at great loot. Rinse and repeat.

This build is very effective for player counts up to and including 3, however the efficiency begins to slow down above this.  It is still possible, but becomes slow.

It is not possible to solo Ubers with this build and I would not recommend trying it!  If you want to experience the Uber fight you can support a more conventional killer (e.g. Smiter) by staying next to them and using your War Cry skill to stun and kill the summoned minions.

Diablo Close is possible, but would be a long and slow fight and I wouldn’t recommend this build for that purpose.