Home > Blog / The History of Rpgstash

The Story of Rpgstash - A 20 Year Retrospective

Our story starts in 2000, 4 years prior to Rpgstash.com’s launch. Our founder was a student in Sweden who spent most of his time grinding in Diablo 2. One day he realised that in-game items could be sold for real money, so he started his online business. Orders were managed via MSN (in those days it was everyone’s preferred communication tool), and were paid by cash.

By the end of 2000 it was time to move on to something more ambitious, so he started listing and selling items through eBay.com. The demand for items was huge, and he quickly rose to power seller status. In 2001 it was time to move on to something even bigger, so the predecessor of Rpgstash (godlyitems.com) was launched. It was a plain html website that focused exclusively on Diablo 2 services within the US market, being the very first Diablo 2 E-commerce website that quickly grew in popularity. At the time the game’s currency were Stone of Jordan rings, until new items were introduced as the Lord of Destruction expansion got released. 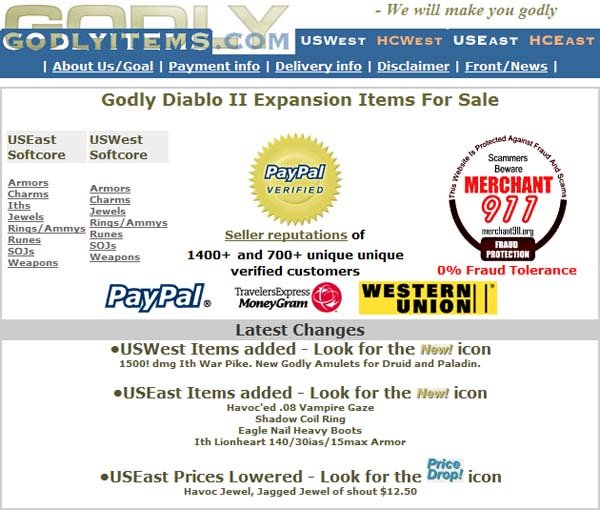 Trades in Diablo 2 were completed exclusively by in-game methods, such as offering items on the trade chat channel, or creating games with the offered and needed items in the game name. Characters had very limited capacity to store items, so everyone was muling items by asking a friend to help out, take items and give them back once a fresh character has been created to store the items. To the displeasure of many players, once in a while the mule-helper friend liked the items too much to give them back. To best describe the experience of trading, here is an accurate portrayal of the game at the time:

Finally in the year 2004 Rpgstash.com was created in order to serve customers in multiple games. The website was PHP based with a modern, at the time high quality design, in a time when most websites looked super ugly compared to today’s standards.

From there, Rpgstash was quickly expanding. The first operation was to introduce Diablo 2’s Europe realm selection. Soon after further expansion took place as our Guild Wars and World of Warcraft stores were launched. We found little success in the freshly introduced games, as unlike in Diablo 2, items were account bound, and trades were restricted to currency transactions, which were not our specialty at the time.

A big milestone in the shop’s history was reached in 2006, when Runescape was added to our selection. Rpgstash quickly gained popularity amongst RS players, and the game became a break-through success. At launch we had no clue about the gameplay of Runescape, and were completing deliveries by logging in to customer’s accounts and bringing their characters to Lumbridge for trading. Much hilarity ensued, as we sprinted to the town while monsters were chasing us.

Soon after we gained the much needed experience and expertise in the game, which distinguishes Rpgstash from most RS stores to this day. The delivery method was updated to trading with the customers in-game. Meanwhile, the website’s design went through a quality upgrade once again.

Our next game of choice was MU Online. Despite being similar to Diablo 2, the game never had a player base that’s comparable in scale. MapleStory was the next on our agenda, and although the game showed a lot of promise, it didn’t end up being a success due to the difficulties of acquiring items and covering all the servers. Selling mesos solely was not our ambition, as our goal has always been providing the widest range of services that can benefit a player in a given game.

EVE Online was our next choice, where we found success due to the free player driven economy and great community. Following Eve, we continued with several other titles such as Dofus, Everquest, FFXI and Age of Conan, but they did not suit our service’s unique advantages. From these experiences we learned that we must build on our strengths, and should only get invested in games where our expertise, service quality, and the selection of services provide exceptional and unmatched benefits to our customers.

Over the past few years we successfully expanded our game selection to World of Warcraft, Realm of the Mad God, Tibia, Elder Scrolls Online, Path of Exile, Escape from Tarkov and Lost Ark, and became an established brand in all these games, however there are still more to come!

Now in 2022 our business has gone full circle. With Diablo 2 Resurrected’s popularity we returned to our roots, our shop-starter game has made a return and is once again being the flagship of Rpgstash. D2R truly resurrected Diablo 2, as heaps of old players came back to play the game. We are lucky to serve a large number of Diablo 2 customers who got to know our store almost two decades ago, and have the same enthusiasm about our beloved game after so long! Rpgstash came a long way since, and now is a bigger brand than ever, but our core values have stood the same: providing a wide range of quality focused, reliable, fast and fairly priced services that allow our customers to fully enjoy and excel in playing their favoured game. We are ready to prove to our customers  that their satisfaction is still our number one priority!

Thank you for all your support throughout this 2 decade long, exciting journey! We will keep on working to serve you to the best of our abilities, and stick to our tradition of providing the highest quality, coolest services for our awesome customers!