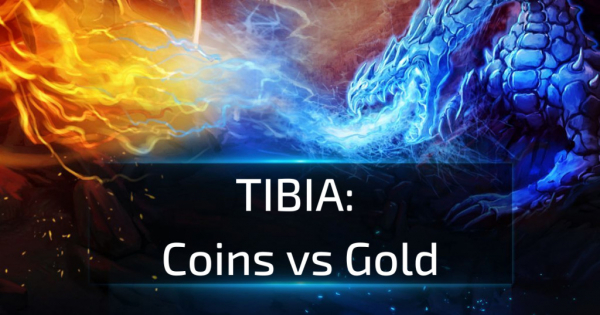 Tibia is one of the oldest MMORPGs to date. Initially released back in 1997 Tibia will celebrate its 20th birthday in less than 2 years!

Depending on your country and payment method the Tibia coins may not be transferable for the first 6 months. This is a security measure taken by CipSoft to minimize fraud. You can only gift coins to other players or exchange them for gold once they are transferable. So without further ado lets look upon the Tibia coin and see it for what it really is. The transferable Tibia coin is a pay to win microtransaction that lets players buy gold by spending real money.

For anyone still confused about gold and coins we have put together a list detailing the differences between the two currencies:

*Depending on payment method, may not be transferable for 6 months.

You may be surprised to know that the value of Tibia coins in gold is much higher in some worlds than others. You can become much much richer by buying the same number of coins in a world such as Aurora compared to many other worlds . Below we supply current exchange rates across all worlds:

Now that 4 months have passed since the introduction of the coin there is a nagging question that needs answering:

Why has not the grey market disappeared or shown any sign of retreat?

There will always be a grey market in MMORPGs as long as players can exchange goods and/or services for several rasons:

CipSoft is not the first game company to have introduced indirect exchange of in-game gold for real money. They grey market is huge and many game companies have given up on fighting it and done the most profitable thing - made a full turnaround. In big games like World of Warcraft, Runescape, and EVE Online similar exchange schemes were introduced long before it came to Tibia and the grey market is still going strong in all of them. It should be noted that at one point in time when the game company Jagex was still fighting real money trading they introduced a trade limit in Runescape preventing quick wealth transfer between players. However, this did not stop the grey market because there are always workarounds. The only thing it accomplished was to alienate players from the game they used to love. Thus, the device that the game companies behind these games have all finally taken to heart is: If you can’t fight it, join in on it.

Ultimately, money talks and bullshit walks and the grey MMORPG market is here to stay. In Tibia as well as in the rest of the games.