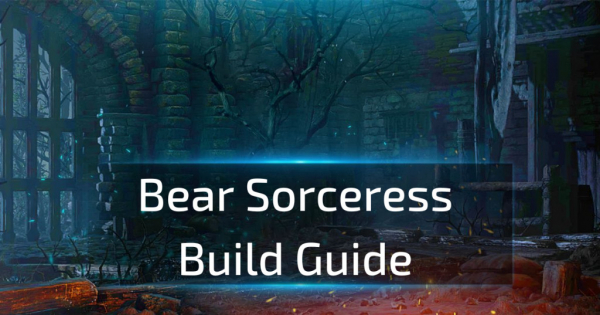 The Bear Sorc is a very unique build which is a lot of fun to play. The build is very expensive as it requires two Dream runewords, a Beast runeword, and optionally Infinity on the mercenary and Call to Arms as a third switch weapon.  Optionally you can use an ethereal Tomb Reaver on your merc and cast Enchant on him to deliver the maximum amount of damage with very fast attack speed.

The Bear Sorc delivers a huge amount of lightning and fire damage from Dream’s Holy Shock aura and Enchant. It also has a high attack rating due to high level Enchant. Compared to the Melee Sorceress, the build has quite good survivability, as you will be moving around in Bear form.

The build can farm any content as it has two damage types. While it is not effective at areas where monster density is high, it will pretty much one-hit any enemy. The movement speed is also only a portion of other sorcs, as it cannot teleport. The bear sorc is not an effective magic finder due to gear limitations, so the main reason to play it is really just to have fun.

Attacking skills: You will rely on normal attack to kill monsters. As you will be using a 6*Sheal socketed Phase blade, your attack speed will be fairly high, you will slap enemies at a fast pace.

Movement: Running is the only option for movement.

Survivability: Compared to other sorc builds, the Bear sorc has decent survivability thanks to the Bear form. Still, you must have 75% all resistances on Hell difficulty, and some damage reduction can come handy via a Verdungo belt or a String of Ears. In case you want to use Sunder Charms, you should wear a Chains of Honor armor to neglect the minus resistances. While it is not mandatory, you can carry a Call to Arms in your inventory and Buff yourself frequently to maximize your life. Expect to die once in a while, the build is not viable on Hardcore unfortunately. Make sure to always have Frozen Armor and Energy Shield casted on yourself.

Magic Find: The build is unfortunately not fit for magic finding.

Strength: Have just enough strength to wear your equipment

Dexterity: Have just enough dexterity to wear your equipment

Vitality: You all your remaining points on Vitality

Have an Act2 mercenary with Holy Freeze aura for crowd control.

Ethereal items don’t lose durability if your mercenary wears them, so having ethereal item bases for each gear slot is preferred due to the increased defense on armor items and increased damage on weapons. In many instances ethereal items that are great for mercenaries will be much more expensive than non-ethereal ones.

If you'd rather skip farming you can quickly buy D2R Items from our D2R Store.

The Stone of Jordan [Rings]